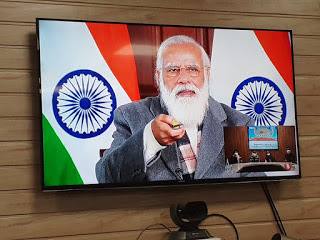 Prime Minister Narendra Modi and Union Housing and Urban Affairs Minister Hardeep Singh Puri on Friday awarded the Best Housing Practice Award to two beneficiaries of Budiya for Best House Construction under the Pradhan Mantri Urban Housing Scheme through video conference. This honor was given to Jagdish, resident of Mauhalla and Queen of Budia, with the heads of Budiya heads of ward number 4 of Municipal Corporation. The two beneficiaries were greeted by Deputy Commissioner Mukul Kumar, Corporation Commissioner Dharmveer Singh, City Planning Officer Vipin Gupta and other officials on receiving the award in the video conference program at the Small Secretariat.

Prime Minister Narendra Modi said through video conference that the Pradhan Mantri Shahari Awas Yojana was started on 15 June 2015 to provide houses to every needy person. Under this scheme, 1.12 crore people had applied to provide houses from the states. Out of which approval for 1.10 crore houses has been approved. He informed that 70 lakh houses have been constructed so far and work on 40 lakh such houses is going on. He informed that the technology of houses being built with convenient and relatively low cost is being disseminated to the poor and middle class urban families with the latest technology at the world level.

For this, the Global Housing Development Challenge has been developed. Under this, new technology houses are built to cope with different geographical conditions in different states. For this, a book based on new and scientific housing construction techniques was also released around the world. During this time, he also inaugurated the light house project in six states by pressing the button of remote. Under this, now people will be able to make their home with new technology. At the same time, engineers and students can enhance their knowledge by studying projects running such techniques in 6 states. He said that certificate course has also been started by Housing and Urban Affairs Ministry in housing construction sector. He said that by the year 2022, work is being done fast towards the goal of providing houses to every citizen deprived of housing.

The Prime Minister said that a plan is also being made to construct houses for fair rent to solve the housing problems of laborers working in metros and cities of industrial area. Cooperation of industrialists and industrial houses will be taken in the construction of such houses.

Build good houses by using the grants from the government properly: –

CPO Vipin Gupta said that under the Pradhan Mantri Urban Housing Scheme, each beneficiary is given a grant of Rs 2.5 lakh to build his house. Jagdish and Rani of Budiya residents of the scheme were also given a grant of Rs 2.5 lakh. Both the beneficiaries built the best houses with this government grant. His name was shortlisted for the award for Best House Construction. After which today he was given this award. He also advised other beneficiaries to make good houses using this grant from the government properly.