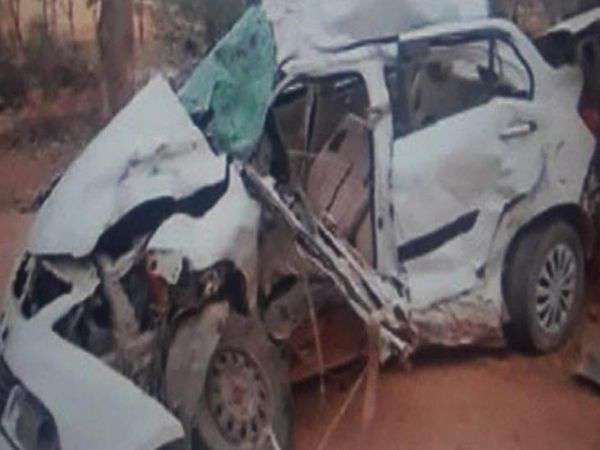 In Mahendragarh, a car damaged by the collision of Tragnale, in which a soldier and his police jawan brother were killed.

In Mahendragarh, two heroes left the world together in a tragic accident on Wednesday. One was a military and the other was a Haryana Police soldier. These two were real brothers. The accident happened when both of them were coming to Mahendragarh for some work in a car. His car collided with a high speed trolley just a little while away from home.

The deceased have been identified as Haryana Police jawan Kuldeep (48) and his younger brother Raj Singh (45) serving in the army, living in village Daroli Ahir of the district. Raj Singh’s son Rahul said that his father had left a few days before. This morning he had to come to Mahendragarh for some work. His father Raj Singh and Tau Kuldeep Swift were riding in the Desire car, which his father was driving. Chah (Rahul Kumar) himself was following the car on a motorcycle.

As the car crossed Nangal Sirohi and approached the Bala ji petrol pump, the driver of a trolley coming at high speed lost control over it and hit the car. According to eyewitness Rahul, the collision was so horrific that the car got stuck in the trolley and moved far away. The driver of the trolley has run away from the spot. Rahul, with the help of people around with great difficulty, took out his father and tau.

When both reached the civil hospital in Mahendragarh, the doctors declared both of them there. Today, the dead bodies of both the bodies were cremated in an inconsiderate atmosphere in the village. According to family members, Raj Singh has two daughters and a son (Rahul), while Kuldeep Singh has a boy and a girl.