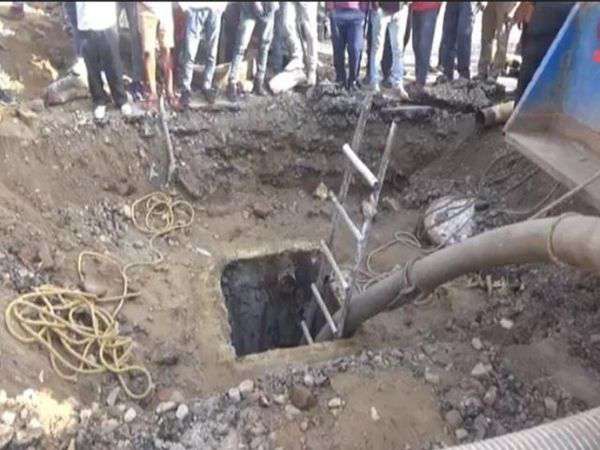 A young man who was cleaning a sewerage line near Lahoria Chowk in Hisar district of Haryana has died. About 9 hours later, on Saturday afternoon, his body could be removed from the sewerage line. Death occurred due to poisonous gas. The young man who landed to save him was also knocked unconscious, who was removed and admitted to the hospital in critical condition.

On Friday night, sewerage cleaning work was being done by the Public Health Department at Lahoria Chowk. Vikrant was also working for 22 years. Negligence resulted in a 3-foot-wide and 18-foot deep manhole cleaning the sewerage without wearing a safety kit.

After landing, when there was no sound of Vikrant for a long time, another young man landed to see Anil, but he also fainted after going inside. Other employees informed the department officials about the possibility of untoward incident. Simultaneously, Anil was taken out and taken to the hospital. After this the campaign to save Vikrant started.

Rescue operations continued till 1 pm on Saturday afternoon and around 1 pm Vikrant’s body was found. The Sarva Employees Organization and the Municipality Association have demanded action against the department officials and the contractor. Employee leaders say that the public health department does not take care of employees’ safety.

According to Anil, who went to save Vikrant, Vikrant’s safety belt was weak. The inside was broken and the safety mask on the mouth was also removed. It is being told that Vikrant was a resident of the cold road area of ​​Hisar and had been working to clean the sewerage line in the city for a long time.