During the last 24 hours, Manethi received the highest rainfall of 107 mm in Rewari district.

After several days of heat in Haryana, once again the monsoon became active. Heavy rains lashed the entire state on Monday. The rains have been so good that the Aravalli adjoining Rajasthan and the nearby Shivalik hills of Himachal Pradesh burst into the water. For the first time after 1995, it has happened in Rewari that it has been raining continuously for about 30 hours, due to which the waterfalls have been seen flowing after years. Due to this the weather has become pleasant. This rain will also prove to be a boon for the crops. However, at the same time, people were seen getting upset due to waterlogging in many areas of the state. In many places, a situation like flood has arisen. Along with this, on the basis of the forecast of the Meteorological Department, the disaster management staff of the state has been put on alert mode. It is expected that more heavy rain may occur in the next 48 hours.

Where was the situation after the rain?

In Bahadurgarh, even water entered people’s homes and the vegetable market was waterlogged for about two feet. Something similar has been seen in Gurugram.

The rain that started in Rohtak from morning is not taking its name to stop. The situation is that the squares of the city have become ponds. Water entered some houses as well. Major roads like Delhi Road, Sonipat Road, Jind Road, Jhajjar Road, Delhi Bypass etc. are also water logging. Also, the situation is similar in the villages included Bohar, Garhi Bohar, Balliana, Kanhenli, Pahrawar, besides Sunaria Kalan and Sunariyan Khurd.

The rain started in Kaithal at around 1.45 pm on Sunday night and continued till Monday evening. There is no such area in the city which has not been waterlogged. The biggest problem is Bhagat Singh Chowk, Pigeon Chowk, Jind Road and Khanauri-Jind Road bypass located in the city have been flooded.

It has been raining in Jind since morning. About 100 mm of rain has fallen in Jind from 4 am to 11.15 am and even after that it is raining. Heavy rains have caused water logging in the city and adjoining areas due to heavy rains.

It started raining in Kurukshetra since 3 am and due to rain, the maximum temperature came down to 27 degree Celsius.

Apart from this, rain is continuing in Rohtak, Panipat, Sonipat, Karnal, Ambala and other districts since Monday morning. Here too, people were seen suffering from the problem of water logging in low-lying areas.

A main road in the form of a canal in Rewari.
rain nectar for crops

On the other hand, millets, cotton, animal feed, pulses, oilseeds along with horticulture and other plants have benefited from the rains. While they needed water, many farmers would now be able to complete the late sowing of millet. The work of transplanting Basmati, a late variety of paddy, is going on in full swing. 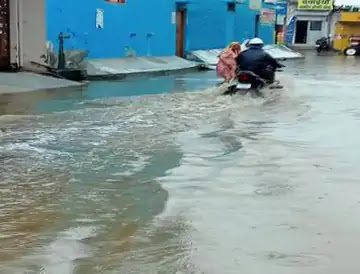 Drivers passing through water accumulated on the road after rain in Rohtak.

Chance of rain till Wednesday Highlights

Meteorologist Dr. Rajesh Kumar from Krishi Vigyan Kendra said that heavy rain alert has been issued on Monday and Tuesday. The process of rain may continue till Wednesday, so farmers should keep an eye on their fields. Dr. Madan Khichad, Chairman, Department of Agriculture Meteorology, Chaudhary Charan Singh Haryana Agricultural University, Hisar said that monsoon has again become active in most areas of the state. Due to this, there is a possibility of rain and thundershower activities in most areas of the state between July 21. During this, there is a possibility of heavy rain at some places.

Flood water entered the villages of Rewari: Came from the mountains of Rajasthan via Gilot Sirani; Rain raining for 24 hours, maximum 107 mm...

Roads of Rewari flooded due to one hour of rain, Today 27 in the city, more than 50 mm of rain fell in two...