In today’s era, rising prices of petrol and diesel have spoiled the budget of common man. In such a situation, if you find a bike that is so cheap that it can cover a distance of 100 km for only 10 rupees, then one time you will not be sure. Then if you say that the frame of this bike has a lifetime warranty and it is not even invoiced, then people will call it impossible. However, such a bike has been launched by Hyderabad based startup named Atumobile Atum 1.0. 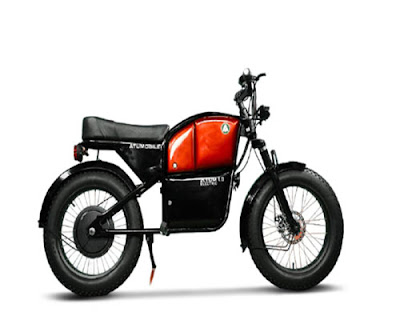 The Atum 1.0 electric bike from Hyderabad-based electric wheel startup Atumobile Pvt Ltd costs Rs 50,000. This electric bike in India is manufactured at the company’s Greenfield Manufacturing Unit in Telangana. Its unit has an annual production capacity of 15,000 bikes which can be expanded to an additional capacity of 10,000 units.

Features and Price of Atum Bike

If you talk about this great Atum 1.0 bike then it is an ICAT (International Center for Automotive Technology) approved low speed electric vehicle. This means that the top speed of this bike is limited to 25 km per hour. Because of this, the Atum 1.0 e-bike does not even require any registration or driving license.

Powered by portable lithium-ion battery packs, the Atum 1.0 goes up to a range of 100 km in a single charge. Its battery is fully charged in less than 4 hours. This electric bike has a battery warranty of two years and is available in many colors.

The Atum 1.0 comes with a lightweight portable battery pack of six kilograms. The design of this battery is easy to carry. This allows drivers to charge anywhere using a normal three-pin socket. The Atumobile company claims that the bike consumes around 1 unit per charge and costs the equivalent of Rs 7-10 per day (for 100 km). At the same time, the price of a traditional ICE bike is about 80-100 rupees per day (for 100 km).

This electric bike gets 20X4 fat-bike tires, low seat height, LED headlight / indicators / taillight and a fully digital display. The Made in India car, which outperformed the world’s leading electric cars, ended the big wait Atum 1.0 bike has been introduced after three years of development. Powered by lithium-ion batteries, the Atum 1.0 provides a space-saving configuration. The company claims that the battery is over five years old.

If we talk about its specifications, then it has a 48 watt 250 watt motor and its top speed is 25 kilometers per hour. Its handle can be adjusted at your convenience. The ground clearance of the bike is 280 mm and the seat height is 750 mm. At the same time, it has a 14-liter bootspace.

The main feature of this bike is the life time warranty on its frame, its light weight (35 kg), stable ride. While this bike is never invoiced. It is about 97 percent cheaper than petrol. Apart from this, this bike does not require any service, that is, its maintenance is not heavy on the pocket.

1. Bird flu has knocked in many areas of the country including Himachal Pradesh – Yamunanagar