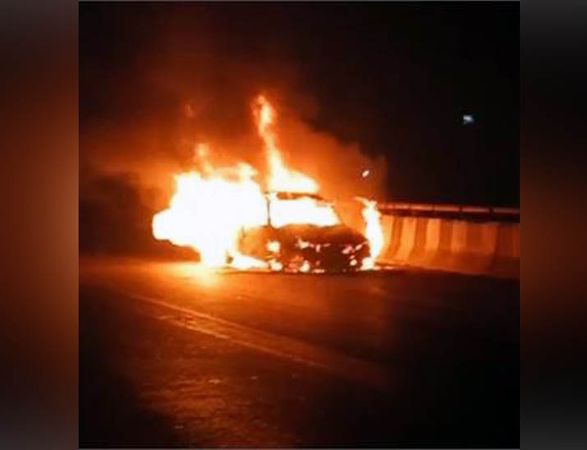 A sudden fire broke out in a moving car on the highway on Friday in Sonipat. The incident is late at night, When 3 friends from Delhi were going towards Karnal. Suddenly the car caught fire. Soon after this incident, the three in the car jumped and saved their lives. Fire Department was informed in Anan-Fanan, But before the fire team arrived, the car turned into a pile of junk

According to the information received, A young man from Mongolpuri, Delhi was going to Karnal at his maternal uncle’s house on Thursday night. He had two friends with him in the Hyundai Accent car. When they were passing by Gannaur, a car running on the flyover suddenly caught fire. All three friends,Immediately saved his life by jumping from the moving vehicle. By the time the fire brigade arrived to overcome the fire, By then the car was completely burnt to ashes.

Incharge of GT Road Outpost, Jitendra Kumar says that he was reported to have caught fire in a car late at night. After the information, the fire team overcame the fire and at the same time the police gathered evidence from the spot. Although still fire The real reason for the sound was not known

CNG kit can be installed in old cars, government approved

Delhi Weather: There is no relief for the people of Delhi suffering from high humidity and hot air, know when it will rain

Thousands of farmers traveled to Delhi from Panipat, Chadhuni said – Government could not explain the benefits of agricultural laws in 11 meetings

People started to take to the streets to save patients, Rohtak Breaking News