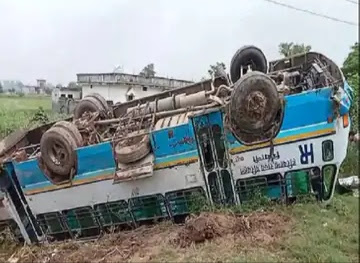 20 people injured in an accident on Ambala-Hisar road; The passengers said – it was raining and the driver was just running very fast

A Haryana Roadways bus overturned in Haryana’s Kurukshetra district on Tuesday morning. About 20 people are said to be injured in the accident, although they have received minor injuries. Villagers and police team reached the spot and carried out rescue operation and took the injured to the hospital. The injured were admitted to the hospitals of Saraswati Mission Hospital, Pehowa, General Hospital, Ismailabad.

The accident happened near Malikpura on Ambala-Hisar road. The bus was going from Bhiwani to Chandigarh when while overtaking Ismailabad overturned uncontrollably near Malikpur village. The injured went to their destination after getting first aid. The accident was reported to the police by passers-by. As soon as the information was received, the team reached the spot. Now Ismailabad Police is busy investigating the accident.

The passengers say that it was raining first, the bus was on speed from above. The conductor is saying that the bus overturned while overtaking. Rajesh, who boarded the bus from Pehowa, told that there was a tent on one side in front and a tractor was going ahead of it. The driver made a cut while overtaking and the bus got unbalanced and veered off the road. Due to the high depth, the bus overturned.

SI Satish Kumar of Sadar police station Pehowa told that the bus of Bhiwani depot was going to Chandigarh. The bus overturned in Malikpura area of ​​Kurukshetra. With the help of local people, the injured have been taken to the hospital. Case has been registered and statements have also been recorded.

The owner has installed drivers in kilometer scheme bus

The Haryana government had hired more than 500 buses under the kilometer scheme. In these conductors have been provided by the government. Apart from this, all other arrangements have to be done by the bus owner himself. On the condition of anonymity, an official of the Roadways Department said that the bus owners keep the drivers in these buses for 10-12 thousand rupees. Ever since this contract has been signed with the government, since then there have been 11 accidents in state buses. Of these, only two are of government buses, the rest are accidents of 9 km scheme buses.