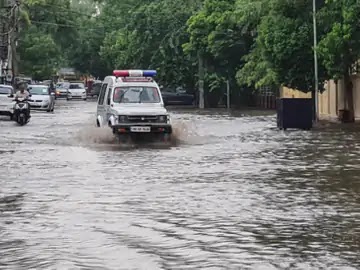 A police gypsy patrolling amidst flooded water on the road after rain in Rewari.

Monsoon has become fully active in Mahendragarh district adjoining Rewari. On Wednesday, apart from Rewari, Mahendragarh district received good rains. There was heavy rain in both the districts for about half an hour. In Rewari, the situation became such that due to the rain water, the roads were flooded with water. Apart from providing relief to the people from the heat, this monsoon rain has also benefited the farmers, because these rains are very beneficial especially for the millet crop. The Meteorological Department has forecast heavy rain for the next 24 hours. So far on Wednesday, 27 mm of rain has been received in Rewari, while Mahendragarh has received more than 20 mm of rain. Rewari has received a total of more than 50 mm of rain on Tuesday and Wednesday.

Monsoon was expected to be active in the beginning of July, but this time the monsoon has reached Rewari and adjoining districts with a delay of 15 days. On Tuesday, the first rain of monsoon was received in Rewari and some towns of adjoining Mahendragarh district, but for the second consecutive day on Wednesday, the rain completely covered Mahendragarh district. After the rain, the weather has turned completely cold. People have got relief from the heat. At the same time, the demand for electricity has also reduced due to cold weather. Farmers were expecting this rain beneficial for the crops for the last several days.

This is the condition of almost every road in the city after heavy rains in two days.

Rain may continue for the next two days

According to the Meteorological Department, the monsoon has become fully active in Rewari and surrounding districts. Rain is likely to continue for the next two days i.e. till July 15 and 16. If the rains intensify, then there can be a disaster in the district as there is no arrangement for the drainage of rain water. In Rewari and Mahendragarh districts, there has been an air of administrative claims regarding the drainage of rain water.

Traffic slowed down due to rain

The traffic has slowed down due to the rain which started at around 3.45 pm. Due to water logging on the roads of the city, there was a situation of jam. However, the traffic police, taking the front, made a lot of effort to smooth the traffic.

Flood water entered the villages of Rewari: Came from the mountains of Rajasthan via Gilot Sirani; Rain raining for 24 hours, maximum 107 mm...