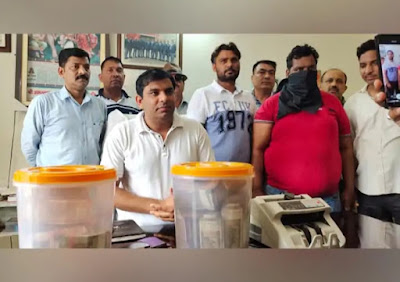 Ransom was demanded from two doctors sitting in America

(ads1)
Police has arrested 3 people in Karnal. It is alleged that he used to brokerage for a crook sitting in America. The case is about demanding ransom from two doctors in Assandh in the district. Police has also recovered 15 lakh from the accused out of the money given by the doctors. In addition, Rs 27 lakh more has been recovered. After this, when they were presented in the court, the court sent two to jail, while the third has been given on remand. At present, the process of questioning him is going on.
The accused have been identified as Jaidev Kumar, a resident of Baspa (Pattan) in Gujarat, Mahendra, a resident of village Kantharni (Mehsana) and Navneet Saxena, a resident of Bilaspur (Rampur) in Uttar Pradesh. The main accused of their gang, Diler (Assandh resident) is sitting in America, who demands ransom. CIA-2 in-charge Surendra Singh said that on June 23, Diler Singh had demanded Rs 20 lakh from Dr Rajesh of Assandh, while three days later, on June 26, another doctor Sandeep also demanded Rs 20 lakh.
Navneet Saxena was arrested from Amritsar in Punjab on July 8 after the disclosure of Jaidev and Mahendra, the police official said. On July 9, he was taken on remand of 3 days from the court. During this, he told that he and Diler together make phone calls to the people and ask them for a big amount as ransom and threaten to kill them if they do not give. Police say that those who cooperate with them will also be caught.
After registering the case, the police engaged in the investigation arrested Jaidev and Mahendra Patel from Delhi on July 5. 15 lakh given by Dr Rajesh was recovered from their possession. Apart from this, another hawala amount of Rs 27 lakh cash and a note counting machine were also recovered. On July 6, Jaydev was sent to judicial custody after being produced in the court and Mahendra got a 5-day remand. During the remand, accused Mahendra told that Navneet Saxena had come to him. He had told the doctor to take Rs 15 lakh and give it to him in Surat. Both the arrested accused told that they used to take a hefty commission for transporting money from here to there.