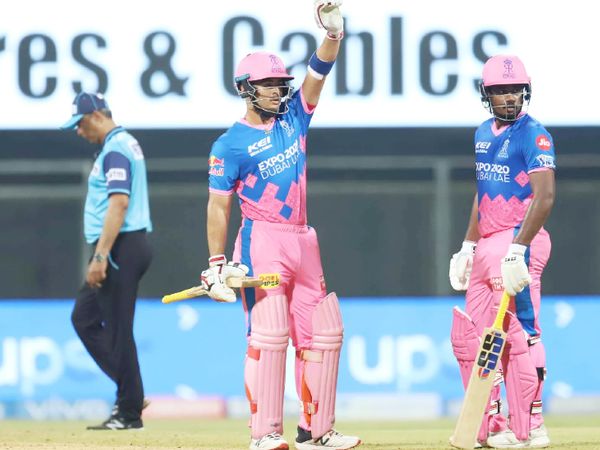 So far, 50+ runs have been done for the 5th wicket between Ryan Parag and Sanju Samson.

The fourth match of the iPL 2021 season is being played between the Punjab Kings and Rajasthan Royals at the Wankhede Stadium in Mumbai. Batting first after losing the toss, the Punjab team scored 221 runs after losing 6 wickets in 20 overs. In response, the Rajasthan team has scored 170+ runs after losing 5 wickets. At the moment, captain Sanju Samson and Rahul Tewatia are at the crease. Shivam Dubey was dismissed for 23 runs off 15 balls. He was caught by Arshadeep Singh in the hands of Deepak Hooda.

Dubey shared a 53-run partnership with Samson for 33 balls for the fourth wicket. Earlier, as captain, Samson made a fifty in his very first match. This is his 14th FIFTY in the IPL. In this case, he equaled Quinton de Kock, JP Duminy and Aaron Finch.

Mohammed Shami gave the Rajasthan Royals the first blow at zero. Ben Stokes came to the opening without opening an account. Shami caught him on his own ball. After this, the team’s second wicket fell at the score of 25 runs. Fast bowler Arshdeep caught Manan Vohra’s catch on his own ball. Vohra was dismissed for 12 runs off 8 balls. Jos Buttler was dismissed for 25 runs off 13 balls. He was bowled clean by Jay Richardson.

Celebrate a wicket, the @arshdeepsinghh way 🕺🕺

Jay Richardson was bowling in the second over during the Rajasthan innings. Vohra hit a high shot on the last ball of this over. Murugan Ashwin, standing on the third man, gave up his easy catch. At this time, he was batting after scoring 10 runs. Samson got a life on the fourth ball of the fourth over. Rahul left the catch behind the wicket. The over was of Arshadeep. Samson was playing 12 runs at this time.

In the 9th over, Sanju Samson was shot at the ball of Rylee Meredith. Shah Rukh Khan and Mayank Agarwal could not judge the ball. The ball fell between the two. In this way, the Punjab team dropped the third catch in the match. At this time, he was batting on 35 runs.

Captain Lokesh Rahul made his 22nd FIFTY in IPL. He scored 91 runs off 50 balls. Chetan Sakaria gets Rahul caught by Rahul Tewatia. Tewatia took a brilliant catch at the boundary. Rahul overtook former Australian all-rounder Shane Watson in most fifties. Watson scored 3874 runs in 145 matches with 21 fifties. He retired from the IPL only after the last season.

Mayank Agarwal and captain Lokesh Rahul landed for the Punjab team. Punjab’s first wicket fell on the score of 22 runs. Opener Mayank Agarwal was out for 14 runs off 9 balls. Fast bowler Chetan Sakaria, making his IPL debut, was caught out by wicketkeeper Samson.

Chris Gayle then came in to bat at number three. As soon as he came, he took some aggressive shots. Gayle was out for 40 off 28 balls. He was caught by Ryan Parag at the hands of Ben Stokes. Gayle hit 4 fours and 2 sixes in his innings. Gayle partnered 67 runs off 45 balls for the second wicket with Rahul.

Hooda and Rahul took over Punjab’s innings after falling 2 wickets for 89 runs. During this, Rahul completed the 22nd FIFTY. At the same time, Hooda scored a half-century on 20 balls. He was dismissed after scoring 64 runs. He hit 4 fours and 6 sixes in his innings.

This is the 7th season of Hooda, who made his IPL debut in 2015. He has scored 3 half-centuries in the IPL so far. Hooda shared a 105-run partnership with Rahul for 47 balls for the third wicket. Hooda was caught by Chris Morris at the hands of Ryan Pollen.

Nicholas Pooran, who came to bat on Hooda’s dismissal, could not do anything special and was dismissed for zero. Sakaria took his best catch at Morris’s ball.

Rahul took Punjab’s score to 200. However, he succumbed to Nervous-90. His wicket fell in the wake of a big shot in the 20th over. Rahul Tewatiya catches Rahul’s best catch on Sakaria’s ball. Rahul hit 7 fours and 5 sixes in his 91-run innings.

After this, Shah Rukh Khan and J Richardson took Punjab’s total to 221 runs. Shah Rukh remained unbeaten on 6 runs and Richardson zero. Chetan Sakaria, who made a debut for Rajasthan, took the most 3 wickets. At the same time, Chris Morris got 2 wickets.

Leg-spinner Shreyas Gopal was bowling in the 7th over of the Punjab innings. Rahul played a long shot on the third ball of the over. Stokes, fielding at the boundary, gave up his catch. The ball missed Stokes’ hand and went across the boundary. At this time Rahul was batting for 15 runs.

After this, in the 9th over, Rahul Tevatia gave up Gayle’s catch on his own ball. At this time Gayle was batting for 33 runs. Deepak fired a high shot over Mustafizur’s ball in the 15th over. Jose Butler and Ben Stokes could not judge it and the ball fell between the two.

Rajasthan defeated Punjab in both matches last season. There have been a total of 21 matches between the two so far. RR has won 12 out of 21 matches. Whereas, Punjab won only 9 matches. Last season, Punjab’s team finished sixth and Rajasthan 8th.

4-4 foreign players included in both teams

4 from Rajasthan and 3 from Punjab

Chetan Sakaria, Shivam Dubey, Mustafizur Rahman and Manan Vohra have been given the debut cap by Rajasthan Royals. At the same time, the Punjab team handed over the debut cap to Shah Rukh Khan, Jay Richardson and Meredith.

Where the Punjab team had changed the name and logo before coming to this tournament. The franchise changed the name of Kings XI Punjab to Punjab Kings. At the same time, the Rajasthan team changed the captain and the director. The franchise released former captain Steve Smith prior to the auction. Also, team director Andrew Macdonald was removed. Wicket-keeper batsman Sanju Samson was named the new captain and Kumar Sangakkara the new director.

The sky will be clear during the match in Mumbai. The temperature is likely to be between 28 and 33 degrees Celsius. The pitch can be helpful for batsmen. In 2019, the team batting here has won 4 out of the seven matches here. The team batting first in 2 wins. There was a match tie.