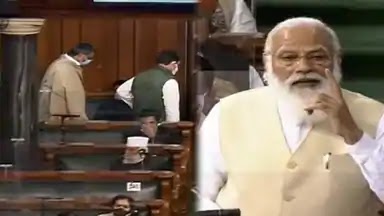 Responding to the discussion on the motion of thanks on the President’s address to the Lok Sabha, Prime Minister Narendra Modi on Wednesday also targeted the Congress Party and the Opposition fiercely. When the PM started responding to the ongoing agitation and politics against agricultural laws, the opposition started to talk. PM Modi said that this is being done so that the truth of the lie that he has spread out does not reach the people. The Congress members walked out, raising slogans demanding the withdrawal of agricultural laws. During this time, PM Modi taunted the Congress, calling it a Confuse and Divided Party.

PM Modi said – Congress is the oldest party in the country. It ruled the country for nearly six decades. It has become the condition of this party that the Rajya Sabha section of the party runs on one side and the section of Lok Sabha on the other side, such a dividend and confuse party can neither do good nor think of the country. What can be a greater misfortune than this. Congress party is also in Rajya Sabha

He debates with enthusiasm, and this second section of the Congress party… now will decide the time. Significantly there are many such Congress members in Rajya Sabha who are said to be angry with the party leadership right now. When PM Modi spoke in the Rajya Sabha, no leader of the party had made a takataki.

PM Modi said about the takataki and noise from the opposition, “This movement in the Parliament, this voice, this attempt to obstruct, is happening under a thoughtful strategy.” The strategy is that the lies and rumors that have been spread will be exposed. That’s why the game of hooting is going on. ”

PM Modi, while removing doubts on agricultural laws, said, “After the implementation of the law, no market in the country was closed, nor the MSP was closed.” This is the truth. Not only this, the purchase of MSP has also increased after the enactment of this law. “The PM said that the government is ready for changes in agricultural laws,” We believe that there should be some shortfall in this, any loss of farmers. , So what goes into making changes. This country belongs to the countrymen. We make decisions for farmers, if anyone says something that is appropriate, then we have no hesitation.