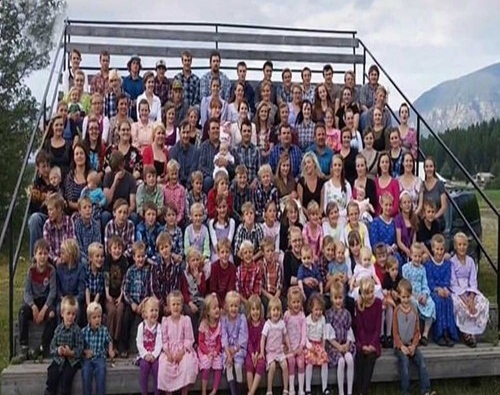 Canada: There is a family in Canada where the entire 150 siblings live together. If someone tells you that a person has 150 children, then you will be shocked, but this is not a joke, but is true. 19 year old Canadian boy Marilyn Blackmore has revealed the secret of her family. Winston Blackmore, a Canadian, has 27 marriages and has 150 children.

Winston Blackmore of Canada is 64 years old and has performed 27 marriages, while he has 150 children. In Canada, he is iden

Three brothers told the story to the world

According to DailyMail’s report, this secret of the family was revealed by Merlin Blackmore through Ticketcock. Her brothers Murray (19) and Warren (21) along with Merlin have kept their story in front of the world.

In his Ticketcock video, Merlin stated that his father had built a big house in British Columbia and in this house he lived with his 27 wives. However, soon there were 150 children and when the family grew up, they bought many houses in the same area. Each house has two wives and 18 children.

150 siblings do not come to the party too

In the video, Merlin said that many of his brothers and sisters have their birthdays on the same day and when the party was held, the members of the house used to make a big crowd. However, not all 150 siblings attended the party. The person whose birthday was, only people of his age used to join the party.

Fear of being a joke

Merlin said in his video that he wanted to tell about his family for a long time, but he was afraid that people would make fun of him or his family might face trouble. After moving to America, Merlin revealed about his family and said that there is a big difference in the age of his siblings. His eldest brother is 44 years old, while the youngest brother is 1 year old. However, Merlin said that it is inconceivable why his father did so many marriages.

How the family’s expenses go

Merlin reports that his father Winston runs the school with his wives. The cost of such a big house is also very high and his father used to grow vegetables in the fields himself. Potato-tomato has never been brought from the market. And the time that is left after school, they do farming. Merlin said that all our brothers and sisters have studied in the father’s school. There were 19 children in my class and all the children were his siblings.