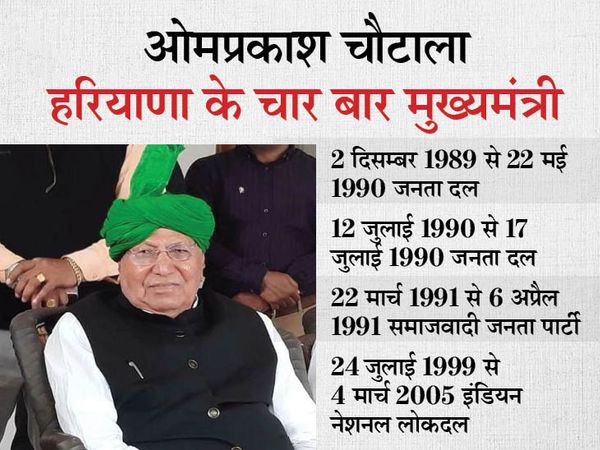 Former Haryana Chief Minister Om Prakash Chautala’s 10-year sentence, imprisoned in the Junior Basic Teacher (JBT) recruitment scam, was completed on Tuesday night. The Tihar Jail administration gave this information to Chautala’s lawyer Amit Sahni. Then the lawyer told that Chautala’s sentence has been completed. While on parole, he is out of jail, but he will be officially released once some paperwork is completed.
Former Chief Minister Om Prakash Chautala was sentenced to 10 years in jail in 2013 in the JBT recruitment scam. In the year 2018, the central government had made a new rule that such male prisoners of 60 years or more, who have completed half their sentence, will be released under the special amnesty scheme. Please tell that Omprakash Chautala is the grandfather of Haryana Deputy CM Dushyant Chautala. Dushyant has separated from INLD and formed JJP, while Omprakash is still with INLD.
Former Chief Minister Om Prakash Chautala had filed a petition in the Delhi High Court on the basis of the rule that his sentence of more than 5 years has been completed. His age is also 89 years. He was 60 per cent disabled in April 2013 and has been more than 70 per cent disabled since the pacemaker was installed in June 2013.
He has been sentenced to seven years in a corruption case. In this way they are fulfilling all the conditions of early release as fixed by the central government. So now his punishment should be pardoned. They are being released under this rule.

What was JBT scam?