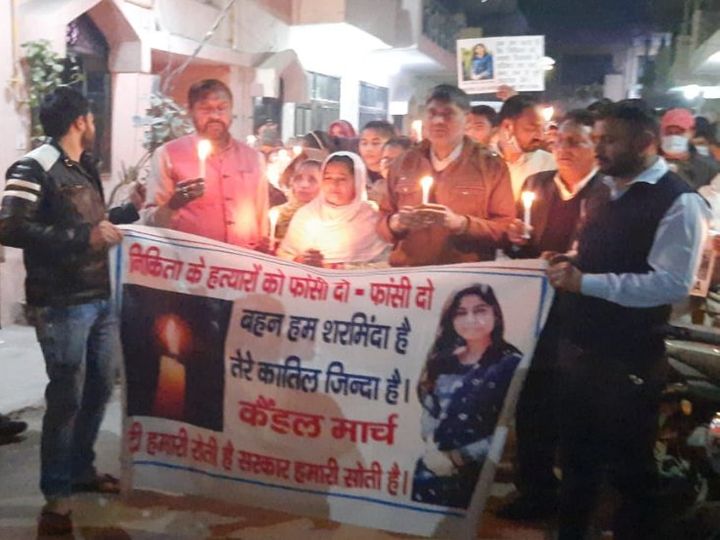 People of all societies united in candle march, prayed for soul peace and prayed

Family members organized a prayer meeting on Saturday night on the 21st birthday of the famous Nikita Tomar murder victim. Also took out a candle march. People of the Sarva Samaj gathered in the meeting and march, who expressed their condolences to the victim and demanded the execution of the killers. On this occasion, family members said that due to the killers, their brave daughter is not in this world.

The killers shattered all their dreams. Murderers should be sentenced to death. Nikita’s father Moolchand Tomar said that the killers showed their generosity by killing their brave daughter. Such killers have no right to live in society. Other family members including Bhai Naveen Tomar, Mama Edal Singh Rawat Advocate, Hukum Singh Tomar raised slogans against the killers and demanded their execution.

Nikita B.Com, a 21-year-old daughter of a family living in Faridabad, a resident of Hapur in Uttar Pradesh, was a third-year student. On October 26, she was shot and killed when she came out after giving a paper from Agarwal College, Ballabhgarh. According to the case, Tousif wanted to kidnap Nikita, the cousin of Aftab Ahmed, a Congress MLA from Noonh, in a single love.

With the help of friend Rehan, she tries to kidnap Nikita from outside her college. But Tausif shot her when Nikita protested. The government constituted the SIT to investigate the murder, which completed the investigation process in 11 days and presented the charge sheet in the court. Now its trial is going on in the court of Additional Sessions Judge Sartaj Basavana.