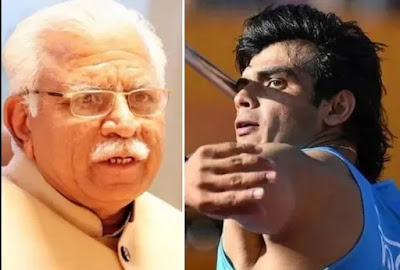 Chief Minister Manohar Lal tweeted that ‘Historic! Lath gad diya chhore…Many congratulations to Neeraj Chopra for winning India’s first gold medal in the javelin throw event by beating the best in the world with a splendid performance. The country was waiting for this moment for a long time. The whole country is proud of you. On the other hand, Haryana Home Minister Anil Vij celebrated the victory of Neeraj Chopra by dancing.

Haryana government will organize an award ceremony on August 13. All the players who won medals in Tokyo Olympics will be honored by the state government in this program. Let us inform that Neeraj Chopra of Haryana has won gold, wrestler Ravi Dahiya has won silver, wrestler Bajrang Punia has won bronze. At the same time, the Indian hockey team that won bronze included two players from the state, Sumit and Surendra. All these players will be honored by Chief Minister Manohar Lal on August 13.

Silver medalist wrestler Ravi Dahiya will be given Rs 4 crore, first class government job and a plot of Haryana Urban Development Authority at concessional rates as per sports policy. Indoor wrestling stadium equipped with modern facilities will also be constructed in Ravi Dahiya’s village Nahari district Sonepat. At the same time, after 41 years in the Olympics, the men’s hockey team has ended the medal drought. This team includes two players from Haryana, Surendra and Sumit. They will be given 2.5-2.5 crore rupees under the sports policy and a second class job in the sports department. The government will give an amount of Rs 50 lakh each to the nine daughters of the state included in the women’s hockey team.

Bajrang Punia will get 2.5 crore rupees

After Delhi, Golden Boy will be honored in Panchkula: Neeraj Chopra to meet Chief Minister Manohar Lal, CM has announced a cash reward of...