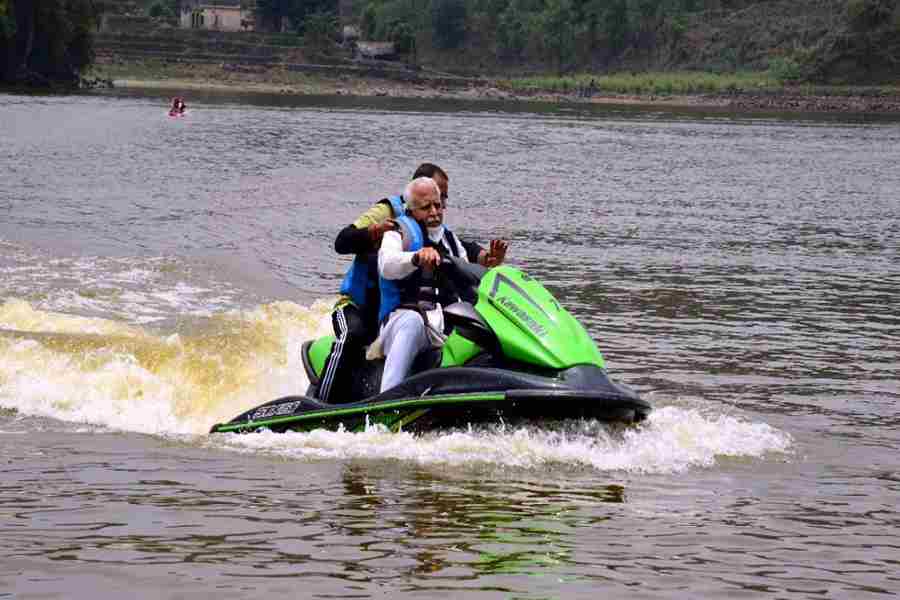 Gurugram / Chandigarh. Tourists will now be able to enjoy adventurers in the valleys of Morni on the border of Haryana and Himachal Pradesh. Taking steps towards making Morni a tourism hub on Sunday, Chief Minister Manohar Lal started from paragliding to jet scooter and boating. While paying respect to the Flying Sikh Milkha Singh, the Chief Minister said that the Paragliding Club at Morni would be named as Milkha Singh.
Chief Minister drove jet scooter, inspected boating and paragliding
After starting adventure activities in Morni and Tikkartal on Sunday, the Chief Minister committed to develop Panchkula in cultural, medical, wildlife and other fields. The Chief Minister inspected Paragliding, Hot Air Balloon, Parasailing, Power Motor, E-Hydrofoil, Jet Scooter, Boating etc. and also drove Jet Scooter himself.
Also Read: Strictly speaking on opposition to agricultural laws: Haryana CM’s advice to the agitators, said – farmers should not test our patience by crossing the limit

And paragliding club to be named after Milkha Singh

The Chief Minister said that training would be given to the youth of the surrounding areas for paragliding and a club would be formed to conduct these activities. It will be named after Flying Sikh Milkha Singh. A tourism information center will be set up in Panchkula. Along with this, adequate arrangements for passenger accommodation will also be made. And 5 buses will be deployed for Panchkula Darshan. Union Minister of State for Jal Shakti, Ratan Lal Kataria, Vis President Gyanchand Gupta, Tourism Minister Kanwar Pal, Minister of State for Sports Sardar Sandeep Singh and Panchkula Mayor Kulbhushan Goyal were present on this occasion.

Chandigarh. Haryana Chief Minister Manohar Lal inspected and trialed paragliding, trekking activities in Tikkartal area near Morni Hills on June 20, a day before International Yoga Day. He then inaugurated the Panchakarma Wellness Center at Thapli. An official spokesman said that the Chief Minister laid the foundation stone of Nakshatra Vatika, Rashi Van, Sugandh Vatika and inaugurated the Nature Track. Later, the Chief Minister flagged off a group of children for a small track from Thapli Nature Camp to Thapli village.

Strictly speaking on opposition to agricultural laws: Haryana CM’s advice to the agitators, said – farmers should not test our patience by crossing the...

Corona epidemic war: Chief Minister Manohar Lal announced to increase the lockdown of the state till May 24, social media Vij wrote – and...

Third wave of corona in Haryana: Chief Minister Manohar Lal Khattar said – the situation is getting out of control; Hinted at taking big...