In Gurugram on Sunday, the morning of Holi festival got worse when the flyover under construction on Dwarka Expressway suddenly collapsed. Ambulances received the scene about 25 minutes after the accident and two people were rushed to the hospital, while more are feared trapped under the debris. Rescue teams and every one top officials have arrived on the spot and relief work goes on. 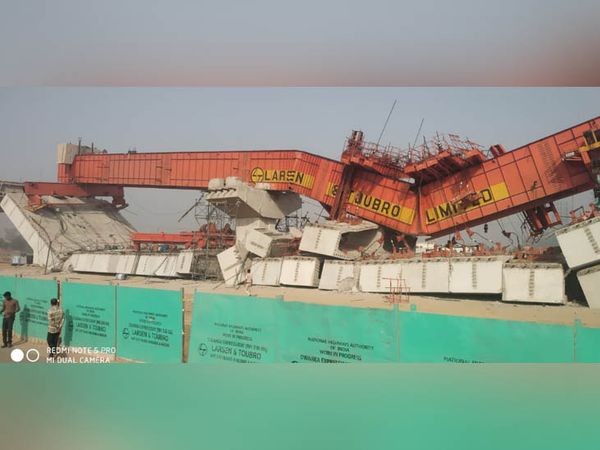 The accident occurred at 7.20 within the morning. consistent with the knowledge , about 250 meters long a part of the flyover being constructed on Dwarka Expressway here suddenly fell. Its 25 minutes 7.45 minutes police and ambulance vehicles reached the spot. Quickly, the senior officer and rescue team reached the spot.

Senior Fire Officer Isham Singh says that his team reached the spot immediately after going to know, big cranes are needed for the rescue work. In such a situation, his staff has now returned. However, the National Disaster Response Force (NDRF) isn’t required, because the company has large cranes to lift this under-construction flyover. Debris removal has started.

Attempting to repair after cracks in one part

RK Mishra, the project director of Dwarka Expressway on behalf of the National Highways Authority, who reached the spot at 9:30 pm, says that an effort was being made to repair it after cracks occurred during a segment of this flyover. Some people were working, then suddenly 82 meters fell from one pillar to a different pillar. immediately the front portion of the flyover is additionally shaken, therefore the second beam also will need to be removed. Just what percentage people are victims of the accident, it can’t be said now.

The incident of fall into construction flyover in Gurugram has already happened about 7 months ago. On the night of twenty-two August 2020, the slab between Pillar Nos. 10 to 11 of the elevated road under construction on the Gurugram-Sohna-Alwar highway fell straight down. Two workers were also injured during this accident, while traffic was disrupted till subsequent day. within the aftermath of the accident, the then project director of NHAI, AK Sharma, sternly prohibited further work until the corporate completed the safety arrangements. within the first week of February 2021, NHAI fined construction company Oriental Structural Engineers Private Limited Rs 3 crore for the incident.

Project Director Shasibhushan says that consistent with the policy, there was no case of banning the development company for a few time. There was a case for imposing penalty. The fine has been imposed. especially , the whole project is being monitored to make sure that there’s no shortage at any level. to finish the project soon, work has been expedited at every level.

Former technical advisors say – who should make a team leader

On the opposite hand, JHA Suhag, former technical advisor of NHAI, says that construction companies should select team leaders on the idea of experience. for a few time, this subject isn’t seriously taken care of. An engineer with a degree from IIT or NIT or retired Superintendent Engineer or Chief Engineer from PWD should be made a team leader. A retired engineer from NHAI also can tend this responsibility.

Ruckus on dogs in Gurugram: food-eaters and exterminators face to face; Complaint given to police too, case of biting two children