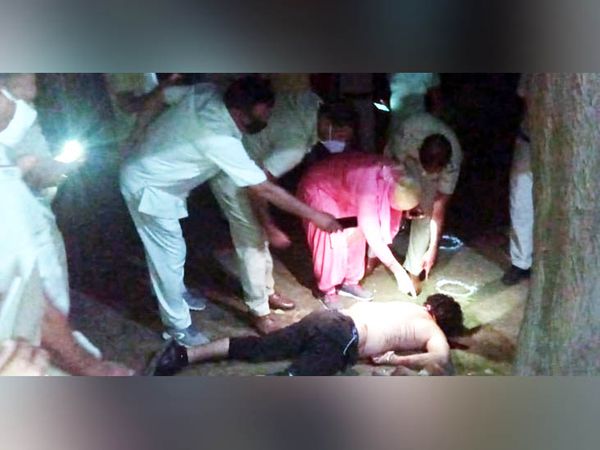 The FSL team arrived at the spot after receiving information about the murder incident in Rohtak.

In Rohtak, a young man was shot to death on Monday late evening after being faked with bullets. A lawyer by profession, this young man was exercising on the ground at the time of the incident. Suddenly two youths came there riding on a bike and they fired more than 10 rounds. The young man ran to save his life, but the attackers kept on chasing and firing. The police have registered a case against 6 youths in this regard and have started further investigation. According to preliminary information, the incident is suspected to have taken place in the affair of the girl.

The incident took place at the stadium of Vaishya Institute at around 7:15 pm on Monday. Ankush alias Siddharth alias Gauri, resident of Vijay Vihar, Delhi, was a LLB final year student in Ghaziabad. The Janata Colony of Rohtak was staying with her grandmother for about a month and a half. Siddharth’s father is an advocate in Delhi’s Rohini court, while a few days ago he too started practicing in Rohtak court. On Monday evening, Siddharth went for a walk with his friend Nitish and Kuki at the stadium of Vaishya College. At that time, two attackers came and started hurling bullets.

The watchman told that the crooks came after hanging the wall

After the information, DSP Mahesh Kumar, in-charge of Shivaji Colony police station, Balwant Singh, FSL incharge Dr. Saroj Malik Dahiya reached the spot. Around 10 shells of bullets have been recovered from the spot. The big question in the investigation is that the stadium is closed due to the lockdown and how did Siddharth reach here. It may be that he too entered the stadium after closing the wall. It is believed that Siddhartha comes here to run, the miscreants already knew about this. Unidentified after the murder, the attackers also took away her purse and mobile.

In this complaint, Siddharth’s brother Akash has told in the complaint at Shivaji Colony police station that Siddharth was murdered by Lokesh alias Gogi, Robin Ahlawat, Deepak Chhillar, Chintu Kharavadia and Tejas Bohar under the conspiracy, because all these years ago Akash’s friend Kapil Kadian was killed. Apart from this, Siddharth had a friendship with a girl. The girl’s brother Golu Myna also threatened her to stay away from her sister. It is feared that Goli Maena along with his accomplice may have carried out the murder or got someone else murdered. Janta Colony outpost in-charge ASI Rajesh Kumar says that on the basis of this complaint, police has registered a case against 6.