Resentment is growing among the farmers who are agitating for the demand to repeal the agricultural law. The farmers have clearly stated that the government has only been shown the trailer since the tractor march and now the entire film will be shown. Only then will the government realize the power of the farmers. 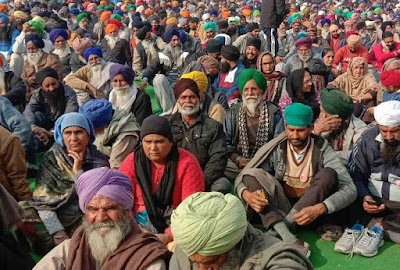 Despite continuous dialogue between the farmers and the government, no solution seems to be forthcoming and pressure is being made on the farmers to agree to amend the law. Therefore, farmers have now started mobilizing the movement and full emphasis will be laid on the success of the Republic Day Farmers Parade.

Farmers are sitting on the borders of Delhi demanding the repeal of the Agricultural Law. Despite the cold and rain, the farmers’ movement has been going on for 44 days, but even after so many days, there is no solution to the problem. Eight rounds of talks have been held with the government so far, once home minister Amit Shah has met farmers.

Every time farmers are assured that this time there will be some decision in the meeting and the farmers also go with the hope of finding a solution. Every time the meeting of the government and farmers ends at the same place where it started several months ago. At the same time, according to the farmer leaders, till now the ministers of the government used to give assurance about a solution to the laws. This time the ministers clearly said that instead of repealing the law, they should talk about amendment. On this the farmer leaders have also made it clear that the government should also talk about repealing the law instead of amendment.

If the patience of the youth is broken, no one will be able to handle them.

UP’s farmer leader Dharmendra Singh said that the ministers of the government have been clearly told that whatever martyrdom they want, they are ready to give martyrdom. You cannot keep our patience for long, if the patience of the youth is broken, no one can handle them. Farmers will have to gear up and it will take a long time. The farmer has thrown his strength and everyone is lying on the Delhi border. Now you can go back only after repealing the law.

Will not back down from martyrdom

Haryana’s farmer leader Abhimanyu Kohar said that even after watching the trailer, the government does not understand and now the government will have to show the film. If we now had to give martyrdom to people, then we will not go back even further. But agricultural laws will remain canceled. It would be better if the government does not talk about the amendment, because no leader is willing to accept it.

Government’s attitude is not good, the center is axing at its feet

Farmer leader Kripa Singh of Punjab said that the attitude of the government is very wrong. It is being denied to repeal the law and pressure is being made to amend the law. The government should not do this, because no one can handle the farmers if they deteriorate. By adopting this kind of attitude, the government is axing itself on its feet.

Decisions to increase movement will be implemented