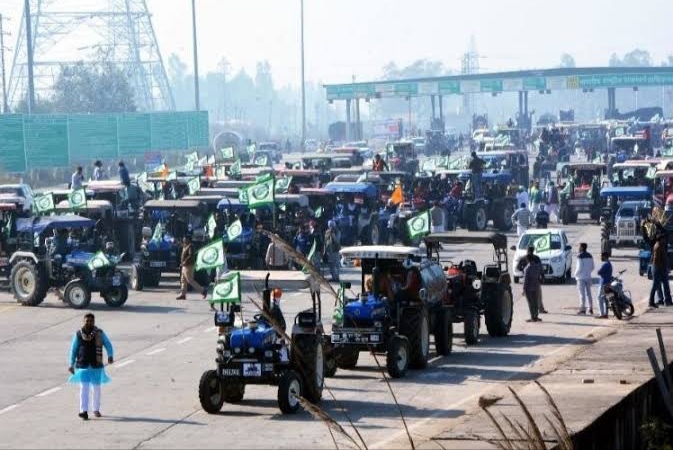 Faridabad News: Police tried to stop agitating farmers (Kisan Aandolan) moving towards Delhi with tractor-trolley, after protests the situation in Faridabad became serious. And the farmers & police have come face to face here.

Faridabad. There has been violent clash between farmers and police in Faridabad (Haryana) district of Haryana. The police have lathi-charged (Lathi Charge) on the farmers on the stones of the farmers. The situation has become serious here. And the farmers & police have come face to face here.

Explain that the agitation of farmers is going on against the 3 new agricultural laws of the central government. Tuesday is the 62nd day of agitation. Even before the Republic Day parade, farmers have started taking out their tractor march. The Faridabad police had laid siege to all major roads throughout the city over the peasant movement. A line of National Highway was opened by putting barricades in Sikri also.

Today, some farmers of Madhya Pradesh, Rajasthan and Palwal sitting in Palwal were secretly carrying tractor-trolleys and heading towards National Highway Sikri via the village route. At first, the Faridabad police tried to stop them and explain, but the farmers were not ready to listen to anything. After this, when the farmers tried to proceed with the tractor-trolley towards the barricades, the police lathi-charged them.

Let us tell you that strict security arrangements were made in place to prevent the farmers’ tractor rally from entering Delhi. But in many places, the farmers broke the barricade of the police and tried to enter the capital. The police also had to use force to control the farmers.

According to reports from different places, police and security forces charged sticks to control the farmers and fired tear gas shells at some places. There is also news of the use of water canons from some places. Police barricades were broken by the farmers on the Ghazipur border connecting Delhi-Ghaziabad. Tear gas shells were released from the police and lathicharge was also done.