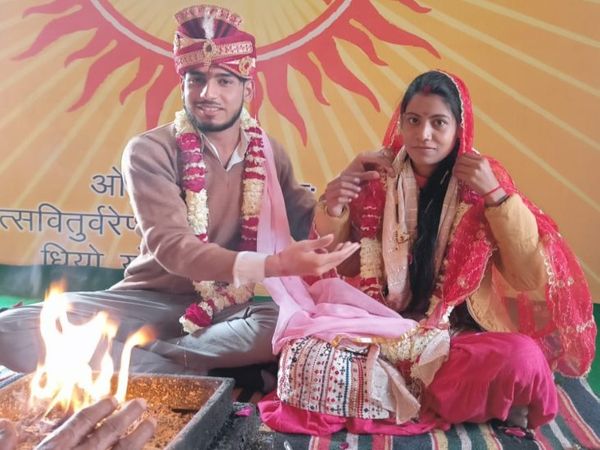 A heart-wrenching incident has surfaced in the Faridabad district of Haryana. A sub-inspector posted here in GRP passed his daughter’s love so far that he along with his brother killed the daughter. He was also cremated as well About a month and a half ago, the daughter had a court marriage with a friend. But the accused had brought the daughter’s marriage to her house by accusing her of arranging the marriage. City Thana Police filed a murder case against the Sub Inspector on the complaint of the husband of the deceased have taken. The accused GRP is serving as the outpost incharge in Ballabhgarh

This is the case

Sagar Yadav, a Mukesh Colony resident of Ballabhgarh, works in a private company. He loved the sector two resident gentle daughter Sohanpal who read with him. Komal also liked Sagar. The girl’s father is a sub inspector in Sohanpal GRP. Currently he is in Ballabhgarh,GRP outposts are in charge. According to the ocean, Komal’s family members were not ready for marriage. In such a situation, Sagar and Komal married the court on 8 February 2021 and asked for protection from the court. The court gave three days of protection. On 11 February, the two then appeared in the court. During that time Komal KFather Sohanpal promised to get both arranged marriages and brought the daughter to her house.

Sagar’s father Umed Singh reported that on 19 February the girl’s father Sohanpal had made Ring Saremani and promised to marry on 15 March. But he was not happy with this marriage. He wanted to marry the daughter elsewhere. Gentle for this There was constant pressure on him. On March 15, when he asked about getting married, Sohanpal asked for time by pretending to be the death of one of his relatives. On 16 March, Komal messaged her husband Sagar and told that her father Sohanpal and uncle Shivkumar is talking about something by turning off the room light. I am scared. The girl was not a mother and brother at the time of the incident. Two days later, on 17 March, there was news of Komal dying near Sagar

Sources say that the Sub Inspector cremated the body by taking information and postmortem to the police without asking the daughter to commit suicide, taking the body to the Saharana of his village. Sources also said that accused Sohanpal in his GRP station Also told about the daughter committing suicide.

5 years ago both met

Sagar’s father reported that his son Sagar and Sohanpal’s daughter Komal studied in a private instute 5 years ago. The two beat together. Sagar later started doing jobs and Komal was doing Amtek. Komal’s husband Sagar says that both He was married with religious Rit custom in Arya Samaj temple. But he is murdered by father Sohanpal and uncle Shivkumar. Komal could not commit suicide. On Sagar’s complaint, City Thana Police has filed a murder case against Sohanpal and Shivkumar

Tauseef, the main accused in Nikita’s murder, challenged the verdict of the trial court, the petition was approved in the High Court

City bus started in Faridabad: from 10 to 30 rupees, you will be able to travel in the whole city by sitting in an...