Jam in Rohtak due to lack of oxygen, every third patient in Karnal is admitted outside 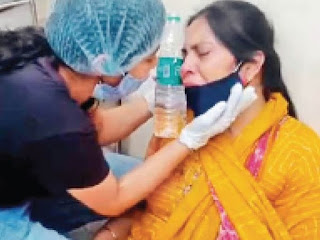 There is a fierce situation in the state over oxygen. People go from one hospital to another with patients, till then it is known that the patient has been admitted to the bed there too. Then start the race again. Now people are taking to the streets for oxygen. Due to lack of oxygen in Rohtak, people jammed it and reached the DC’s house in Jind at night.

DC then sent 4 cylinders. Some are running around the hospital and some are running for cylinders. In Sonipat Government Hospital, 5 ventilators are closed due to lack of staff. Read how relatives are wandering from patients to patients in the ground report.

Families fueled if there was less oxygen in private hospital

Police personnel explaining to the family members who were jamming in Rohtak. 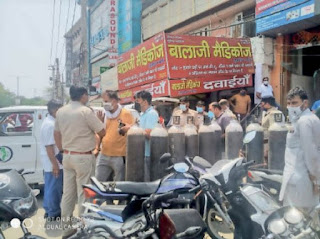 After getting the information of the case, the station PGI in-charge Bijendra Singh and other officers reached the spot. About 16 oxygen cylinders were sent to the hospital. Only after this, the family members of the patients opened the jam. The doctors of Admit Corona infected patients in the hospital were told by the doctors that they now have a lack of oxygen. In such a situation, the family erupted and created a ruckus outside the hospital.

After getting the information of the case, SDM Rakesh Kumar, DSP Headquarters Gorakhpal Rana, PGI Police Station In-charge Bijendra Singh, Civil Line In-charge Ramesh Kumar, Urban Estate Incharge Prahlad Singh reached the spot. Explained that there was a lack of oxygen to the people standing outside the hospital. After talking to the doctors of the hospital, he assured to send six oxygen cylinders immediately. After this the administrative officer left from there.

After about 20 minutes, the family members of the patients erupted again and came down on the road. The oxygen cylinders kept outside the hospital jammed on the road. After receiving the information, the officers again arrived at the scene. The authorities provided 16 oxygen cylinders to the hospital. After this, the temper of the patients’ temper subsided. The hands and feet of this administration remained bloated.

Ground Report Panipat
10 MT of oxygen is needed, the government has fixed only 5 metric tonne quota

People said – even if you have to take a loan, but do not let it die due to lack of oxygen

People started to take to the streets to save patients: jam in Rohtak due to lack of oxygen, every third patient in Karnal is admitted outside

There is a fierce situation in the state over oxygen. People go from one hospital to another with patients, till then it is known that the patient has been admitted to the bed there too. Then start the race again. Now people are taking to the streets for oxygen. Due to lack of oxygen in Rohtak, people jammed it and reached the DC’s house in Jind at night.

After that they will discharge the patients, take them anywhere. On hearing this, the family started a commotion. A mother fainted crying, the daughter said by drinking water to the mother- brother will be fine, you maintain courage. The family reached the DC and CMO, but they said that we cannot do anything, the amount of oxygen prescribed by the hospital will be given as much.

Oxygen beds are no longer available to normal beds

Oxygen beds are not far away from normal beds. People are giggling in hospitals to get any amount of money. Shagun Balii, who lives near Salarganj – our eyes have been charged. Her father is Admit, but due to lack of oxygen, the hospital is discharging. We were ready to take a loan, but did not let our father die from lack of oxygen. At the same time, one person wandered on his wife on Tuesday. Doctors sitting in the emergency of the hospital, seeing the patients, are returning the beds as empty.

6 patients had to be brought back from Karnal, every third patient is resident outside here

Serious patients of Corona are having to eat in hospitals to get admitted. More patients are coming from Delhi and UP. Every third serious patient is coming from Delhi. A. There are no beds here either. No ICU beds were empty during the day, there are a total of 194 ICU beds in the district. Out of 448 oxygen beds, 10 beds are empty.

Sunil from Karol Bagh in Delhi said that my mother is a respiratory patient. Got a bed at Kalpana Chawla Medical after 10 hours of waiting. Officers from Chandigarh are calling and recommending beds. 10 serious patients were waiting in the park hospital since morning, admitted 4 patients after discharging 4 patients from ICU.

6 severe patients had to return. On this, DC said that 30 ICU beds will soon be increased in Kalpana Chawla Medical College. Have purchased 30 monitors. A 50-bed hospital is being built in Panchayat Bhavan. Beds are arranged, oxygen is being arranged.

The epidemic is wreaking havoc. These days between 700 and 800 patients are coming every day. Normal beds remain in hospitals, but oxygen beds and ventilators are full. Khanpur Medical College has 136 normal corona beds empty out of 300 beds, but 27 out of 150 oxygen oxygen beds are empty. 50 ventilators are all full.

The situation in the civil hospital is that 5 ventilators are closed due to lack of staff. He visited the hospital a year ago. Beds are not available for serious patients in private hospitals. No separate oxygen cylinders are available for patients isolated in homes. Sahil, who lives in Sonipat, said that he was giving oxygen to his mother at home. The cylinder ran out. At first it was easy to find. Now, I can not even get to go to the plant. The administration is directed to supply only the hospitals. There is a problem of beds in hospitals.

4 Tales of Endless Pain of Wandering Patients
1. If you do not get a bed in Panipat, you die while taking Safidon

A 60-year-old man from Samalkha died on Tuesday morning after not getting oxygen bed. On Monday morning, he was admitted to oxygen bed in a private hospital in Samalkha. The doctor responded when the oxygen ran out. Beds were also not found in Panipat. He died while carrying Safidon.

2. Bed given to the recommendor, death if not given the right treatment

Harisinh (80), a resident of Uttam Nagar in Gohana, was taken to the Medical College Khanpur Kalan on Monday due to deteriorating health. Grandson Ashish told that the staff had talked about getting beds. Earlier, another patient was admitted and sent back. Harisingh died on Monday itself.

3.Candidates roamed from one hospital to another for 13 hours

Khushboo, a resident of Dwarkadhish Society of Dharuhera, told that 30-year-old Abik was brought to Rewari at 11 am on Monday in critical condition. The bed was not found empty here. Spent 13 hours in 4 major hospitals. Admitted to the medical college at Nalhad, Noh at 12 o’clock at 2 o’clock.

4. Came to Karnal from Meerut, if no bed was found then took Kurukshetra

Mahendra Panwar from Shamli UP told that my grandfather is serious for the last two days. No beds were found in Meerut. Had brought Karnal, but no beds were found here as well. A private hospital in Kurukshetra has got a bed, will take it there. After this, he reached Kurukshetra with the patient, admitted there.