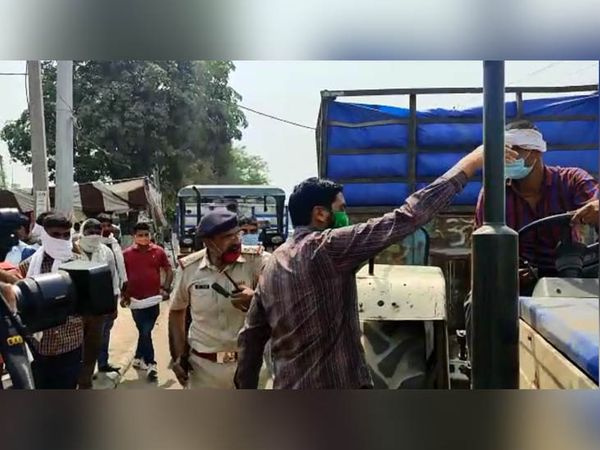 UP tractors kept entering Mandi in the name of Haryanvi farmers; When the phone rang for 4 hours, the secretary of the broken market committee slept

Anil Kumar, the in-charge of Sector-4 post in Karnal, got angry and told the secretary Surendra Singh about the fraud.

Fraud in the wheat procurement has come to light in Haryana’s CM City Karnal. It is learned that on Wednesday, tractors of farmers of the neighboring state of Uttar Pradesh entered the market in the name of Haryanavi farmers. SDM, DC and even the General Administrator were all busy in the duo of the Corona Safety Protocol. Angry locals also called the Secretary of the Market Committee not once or twice, but on the phone for the entire 4 hours, then they lost their sleep. However, by then 12 thousand quintal of Uttar Pradesh had landed in the mandi. Local farmers and adhatiyas have demanded action on this fraud.

In Karnal Mandi, the forgery was going on since Wednesday. Publicly, the wheat entry of UP continued to pass the cut gate in the name of the farmers of Haryana. Surendra Singh, the secretary of the market committee, sat in the office and kept watching. More than 100 trolleys were passed from morning to afternoon. About 12 thousand quintals of wheat from gate number one landed in the mandi. The fraud was reported to the SDM, deputy commissioner and zonal administrator, but all were engaged to pay Corona’s duty.

When these officers called the secretary, the secretary reached gate number one with a delay of 4 hours. When he prevented UP wheat from being weighed on the fork and asked to be taken out of the mandi, the secretary was given the answer that it was ordered by the agent. The result was that the secretary kept watching.

Upon finding out, the agents were also surprised at this forgery in Karnal. It is alleged that for this fraud, bribe is being taken at the rate of about 20 rupees per quintal. This is not the first time anyway. Even before this, Uttar Pradesh has been selling goods in the market of Karnal and Gharaunda. Gate passes are cut in the name of the farmers of Haryana.

The money comes only in the account of the farmers of Haryana and it is guaranteed by the commission. According to the sources, if we investigate closely, it will be found that many traders are buying wheat from UP at Rs. 1910 per quintal and selling it to the state government for Rs. 1975. The money of the concerned officials is fixed in this game. Government agencies are also failing to understand this system.