Home Haryana News Rar on wheat procurement: Assurance of settlement on payments through stockpiles, agreement...
WhatsApp
Facebook
Twitter
Telegram
Pinterest
The factors decided to strike in the meeting, then the CM called for talks in the evening
Arthi said – Farmers who want to collect money through them, should be allowed
CM said – this is the matter of the Center, decision will be taken after talking to the officials of FCI 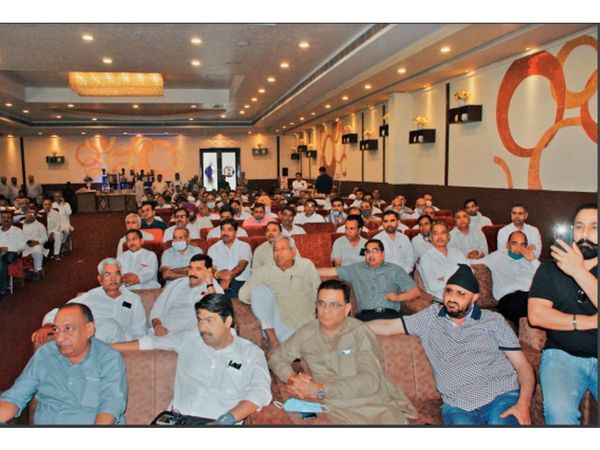 Officials of Haryana State Grain Mandi Aadhati Association met CM Manohar Lal in Chandigarh late on Monday evening. During this time, the agent works. State President Ashok Gupta said that the biggest issue was to make payment of wheat to farmers through factoring.

The adhatis said- the farmers who want to take the amount through the arhatis, the amount should be given only through the adhatis. On this, CM Manohar Lal said that an effort will be made to find a solution after talking to the officials of FCI. Assortant ASO Decided that they would wait till April 6 and 7. If there is no solution, wheat will be removed from the trolleys, but will not weigh.
Assortant ASO Chairman of Rajneesh Chaudhary said that the order of the department is to put a mark on the staple bags which wheat is in them. When the traders disagreed on this, they accepted the demand. Till now, the amount has been deducted from the farmer’s account on the J farm. The department was asking it to take cash from the farmer. Now this amount will be taken from the account of the farmer. It has also been agreed to pay pending interest for two years.

Discussion with the government on these issues as well

The payment of crores of rupees of crores of farmers and farmers of the paddy season 2020-21 has gone to the wrong accounts due to the mistake of the department. There was talk of making this payment immediately.
Complaint system like CM window should be implemented on the portal related to payment related to government procurement.
Allotment is being allowed to some private institutions to buy and sell crops without license, shop and tax without tax, the rules and conditions for trading in mandi should be uniformly applicable to all.
Mustard, sunflower, cotton, groundnut, maize and other crops should be procured entirely through stockings.
The token system should be discontinued, if the need arises then the right and responsibility of the tokens should be cut so that the farmer of which the archer would arrive the goods on which day he would get the token cut according to his own.
The land of some farmers of the state is in the border state and the land of the farmers of the border state in Haryana, they should also be registered on the portal.
In the year 2019, the government had said that 12% annual rate of interest will be given on delayed payment by the government procurement agency, but it has not been found so far. It is also assured to get it done soon.
Procurement agency should be liable for interest for delay in payment of wages and wages more than 15 days.
During the wheat season, the government imposes a deduction on the name of quality and weight by payment of the commissioner, which is absolutely wrong.

Here, first the ministers held a meeting in Karnal

Government should give money to the accountants, they will not weigh wheat on April 8 if they do not accept the demands
Karnal, Haryana State Grain Market Arhati Association meeting was held on Monday. In this, the adalatists said that if the government does not accept the demands in two days, then from April 8, the wheat weighment will be stopped across the state. However, procurement of mustard and gram will continue as before. The meeting held in Sector-5 was chaired by Association President Ashok Gupta.
He said that procurement rules are changed every season. This causes damage. The government is implementing such rules that their work should be stopped. Their main demand is not to put the payment of wheat in the account of the farmer and put it in the account of the jobbers. You will not put a mark on the working gunny. The government should guarantee the commission. In the meeting, the district head of the Adharti Association was in favor of the strike from Monday itself.
Everyone suggested, but Ashok Gupta, the head of the Haryana State Grain Mandi Aadhati Association, told that the CM has called Chadigarh for talks. Therefore, the government has been given two days time. If not asked, we will stop weighing wheat from April 8.

In Karnal Mandi itself, Sumitra Mishra, ACS of the Agriculture Department, said that it is the right of the farmer to bring crops in the mandi, whenever he can. The gate pass will be cut, the trolley that arrives at the mandi gate will be purchased.

Haryana government will give free tablet to students

Omprakash Chautala’s big statement on Ajay and Dushyant’s party JJP, said – time will tell who is where