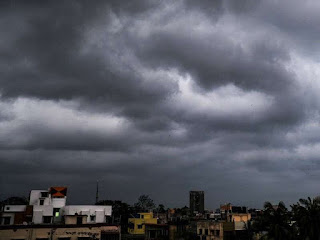 Haryana monsoon update: Haryana can get relief from the scorching heat today. It may rain in most areas till today. Except Jind and Hisar, favorable conditions have been created in the entire state. Monsoon in these three districts may be kind on Monday.
Karnal. Don’t worry people. At this time the winds of the monsoon (Haryana Monsoon update) remain favorable for rain. Torrential rains can occur at any time in Haryana. It rained in many places including Hisar last night, but it only rained and the humidity has increased further. According to meteorologists, there is a possibility of rain at most places of Haryana today.
(ads1)
On Sunday afternoon, there was drizzle in Rohtak and light rain in Tohana of Fatehabad. Weather may change till night in many districts. But due to the possibility of rain on Sunday, Jind and Hisar may remain untouched. It is a different matter that the monsoon can be kind in these places on Monday.
Presently, a turf line is extending from Punjab to North West Bay of Bengal, South Haryana, South Uttar Pradesh, Jharkhand and North Odisha. A Low Pressure Area is persisting over West Central Bay of Bengal off North Andhra and South Odisha coast. Which indicates a strong possibility of rain. However, if we look at the weather on Sunday, it has been cloudy since morning. The speed of clouds has increased in monsoon. The Meteorological Department has expressed the expectation that on Sunday most areas of Haryana may receive rain.
Every year it rains in July, this year people are waiting
If we look at the situation of rains in the last 10 years, every year in the month of July, there has been heavy rain. In a month, the figure of rain has reached 554 mm. However, this year it has rained only once in the month of July. Which is recorded 35.2 mm. Just waiting for the heavy rain.
Rainfall situation in the month of July in the last 10 years
Year  Rain in mm
2011  180.1
2012  34.9
2013  215.4
2014  66.0
2015  231.8
2016  202.8
2017  71.4
2018  554.2
2019  244.8
2020  437.6
2021  35.2
(Note: These figures have been released by the Meteorological Department.)