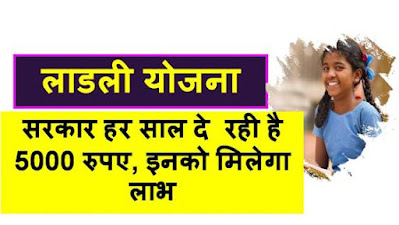 Haryana Ladli Yojana: The ratio of girls to boys in India is still very less. To improve this, the Government of India has been coming up with various schemes from time to time. Not only the central government but the state governments are also engaged in improving the situation. In this sequence, Haryana Government started Haryana Ladli Yojana in the year 2005. The objective of Ladli Yojana is to promote the birth of daughters in the state.

What is Haryana Ladli Yojana?

The benefit of Ladli scheme can be availed by those parents who have only two daughters and their daughter is born on or after August 20, 2005. Under this scheme, the daughter and her mother will be given financial assistance of Rs 5000 every year through the Government Kisan Vikas Patra. This amount can be withdrawn only after the girl turns 18. If the girl does not have a mother, then this letter will be made in the name of the father of the daughter. If both the parents of the girl are there, then this letter will be made with the name of her guardian.

One of the main objectives of this scheme is that if the girl wants to pursue higher education after the age of 18, then she should not face any kind of financial problem. She can use the amount received under this scheme for her education. Not only this, if she wants to spend these money for her marriage, then she can also do it.

This scheme is mainly for those parents who have two daughters. The government wants that such parents should not consider daughters as a burden and there should not be any kind of financial pressure on them. Therefore, the Haryana government has taken the responsibility of these daughters. Through the Ladli scheme, the government aims to empower women and daughters in the state.

Documents required for the scheme-

To take advantage of this scheme, you will have to go to the Women and Child Development Office of your district and fill a form and submit all the necessary items. You can also get the Ladli Yojana form from the nearest Anganwadi and Life Insurance Office. Not only this, you can also fill the form of this scheme online.