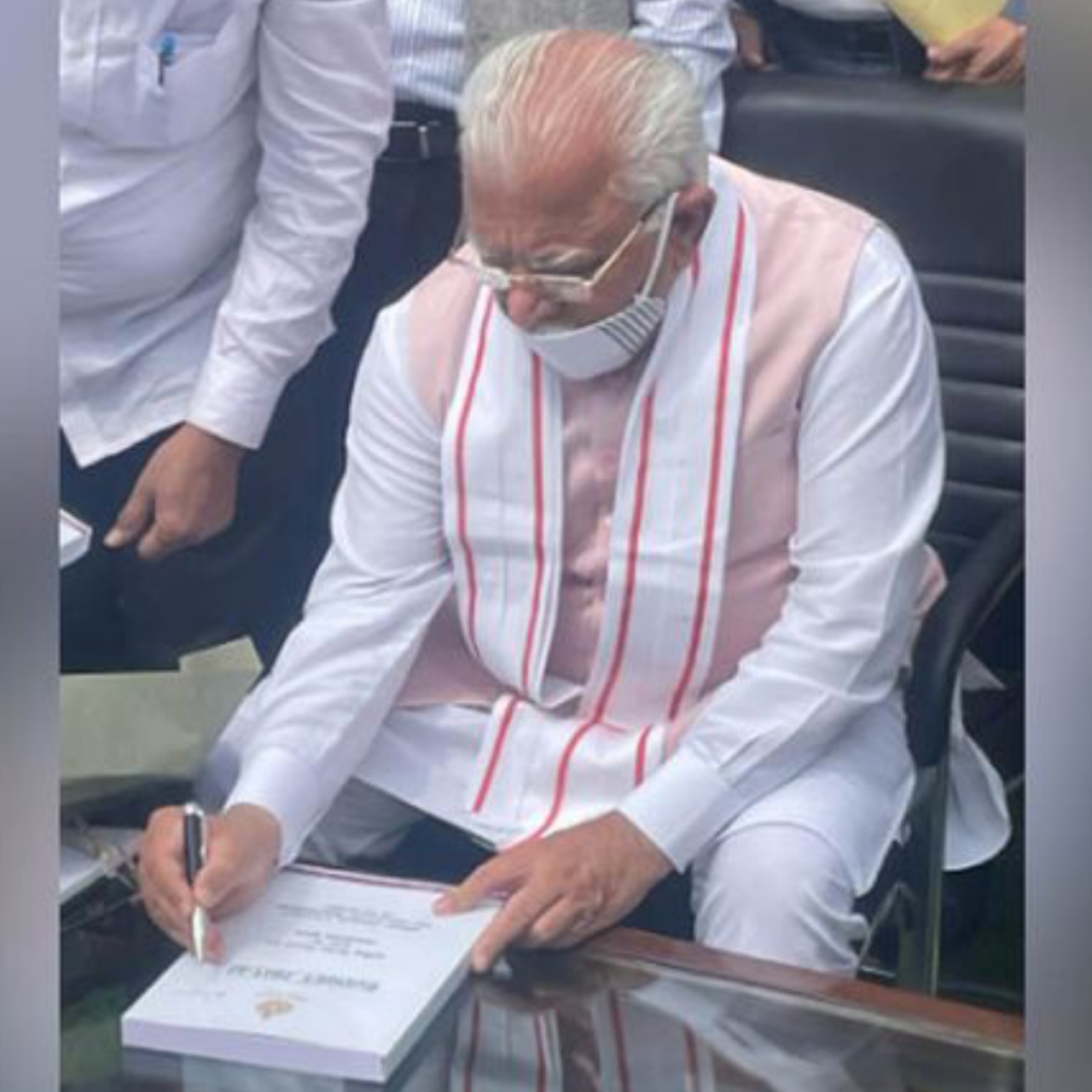 During the Corona period, there was a loss of revenue of about 12 thousand crores rupees.

Chief Minister Manohar Lal said that he dedicates this second budget of the current tenure of his government to the 75th anniversary of independence and the people of the state. In the budget, with the freeing of education up to 12th class, announced to make digital classes in government schools. At the same time, it also announced the opening of 3 new medical colleges and an oncology center in the state.

According to the Chief Minister, the budget for this time was Rs 155645 crore, which is 13 percent more than the budget of the previous year. 25 percent of the budget will be capital expenditure and 75 percent revenue expenditure. It collected revenue of Rs 26038 crore by February 2021, an increase of 11.36 percent from the previous year. 45066 crores were allocated for the schemes related to the State Development Goal. The fiscal deficit for 2021-22 is estimated at 3.83 per cent of GDP.

1. And a provision of 100 crores has been made for the construction of SYL canal. To provide drinking water to Mewat, a Mewat feeder canal of 100 cusecs will be constructed.

2. The Haryana Housing Board plans to build around 20,000 houses on the land. It will also be the nodal department for the implementation of the Pradhan Mantri Awas Yojana.

3. A data center policy is being formulated. Echo system will be installed. There will be full implementation of e-office in boards, corporations and university.

4. The government has increased the old age pension by Rs 250. Now this pension has been increased to Rs 2500. This increase will come into effect from April 1.

6. The Chief Minister announced the launch of Antyodaya Utthan Abhiyan. Under this, one lakh poorest families can be identified and reach their minimum economic limit of 1.80 lakhs.

7. Steps will be taken. The Chief Minister Antyodaya Utthan Abhiyan will be run till 2025.

9. The government will take the protection of Chhatri, Fort Jafargarh of Jind, Lal Masjid located at Dujana in District Jhajjar, Baghwali Kothi and Kaithal Fort.

11. Families with an income of Rs 1.80 lakh per year and total holdings of up to 5 acres per family will get financial assistance of Rs 6 thousand annually.

13. Pinjore and Gurugram will be developed as Film City. Night landings will be possible at airports at Hisar, Karnal, Pinjore and Narnaul.

14. 1823 crore has been allocated to the Department of Labor. This time, the budget of the department has been increased by 40 percent. Construction work of Gurugram-Pataudi-Rewari road including Pataudi bypass

15. This year will be launched. It has been proposed to make Kaithal Jind Hansi road a national highway by 4 ways.

16. 2408 has been sanctioned for Transport Department, 443 for Forest Department and Rs 14 crore for Environment Department. 50 percent students from incubation center by 2025

17. There is a target of giving vocational education, 10 crores will be allocated for this.

18. 6 centers will be set up for fitness of transport vehicles. And these include Ambala, Karnal, Hisar, Rewari, Gurugram & Faridabad. At present there is only one center in Rohtak.

19. 1302 crore has been proposed for the Department of Revenue and 285 crore for the Excise Taxation Department.

21. The Chief Minister said that 24 hours of electricity has been made available in 5080 villages by the state government. Now other villages will also be included in this scheme. 125 new soil testing laboratories will be set up.

As soon as the budget speech was over, former Chief Minister Bhupendra Singh Hooda commented – Khoda Pahad, exited Chuhiya. Hearing this, all the members of the opposition present in the house laughed out loud. At the same time, starting the speech, the Chief Minister said that this budget has been prepared on the basis of the suggestions of MPs, MLAs and various people of the state. The main objective of this budget is to move the state in the direction of development. The budget is also prepared to deal with the challenges of the Corona era and lockdown.

Government lost thousands of crores during the Corona period

The loss of revenue of about 12 thousand crore rupees to the Haryana government in the lockdown due to the outbreak of Corona epidemic, which has now brought the government down to 8000 crore rupees. And to compensate for this loss the government has taken a loan of more than 5000 crores.

On February 28, 2020, Chief Minister Manohar Lal presented a budget of Rs 1,42,34,378 crore for the fiscal year 2020-21. He had spent 2 hours 32 minutes reading the entire budget speech. He started by presenting the budget from the tab instead of the suitcase.