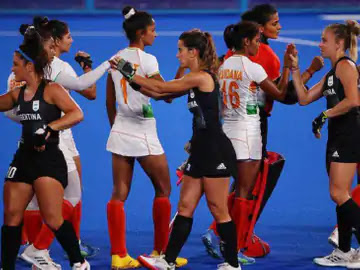 The Indian team will now compete with Britain for the bronze medal.

The Indian women’s hockey team has lost the semi-final match against Argentina on the 13th day of the ongoing Games in Tokyo, Japan. But the medal hopes are not over yet. Because the Indian team will now compete with Britain for the bronze medal. The family members of the players of the team have also said that if they do not go to the finals, will the daughters definitely bring medals.

Let us inform that in the semi-final held on Wednesday, the team lost by one goal. The daughters had entered the field in the tricolor uniform and in the second minute, defender Gurjit Kaur made the intention clear by scoring a goal. But Argentine captain María Noel Barrionuevo scored in the second and third quarters to take the lead over the Indian team and keep it up till the end.

Families sat together and watched the match

The women’s team has 6 daughters from Haryana, whose families watched the entire semi-final match. But before watching the match, the family members also prayed for the victory of the daughters. The families recited the puja in their own way. At the same time, when the match started, everyone cheered for the goal of defender Gurjit Kaur in the second minute. But two goals from Argentina in the 18th and 36th minutes left them a bit disappointed.

Despite this, family members say that the daughters performed brilliantly by reaching the semi-finals in the Olympics for the first time after 41 years. This in itself is a great achievement. They played hard. For them, it is enough for their daughters to reach the semi-finals. We are proud of our daughters and there is one more match left for the medal which the team will definitely win.

There are 6 daughters of Haryana state in the team, out of which one is leading the team, ie Captain Rani Rampal. Apart from these, Navjot Kaur and Navneet Kaur are also there. These three daughters are from Shahbad Markanda. Shahabad Markanda located in Kurukshetra district is called ‘Sansarpur of Haryana’. Sansarpur is located in Punjab and is famous for hockey. It was here that all three daughters grew up and practiced hockey. Apart from these two players Sharmila Godara and Udita Duhan from Hisar and goalkeeper Savita Poonia from Bhiwani are also there. Sharmila Godara is from Camri village in Hisar, Udita Duhan from Nangal in Bhiwani and Savita Punia from Jodhkan village of Sirsa.