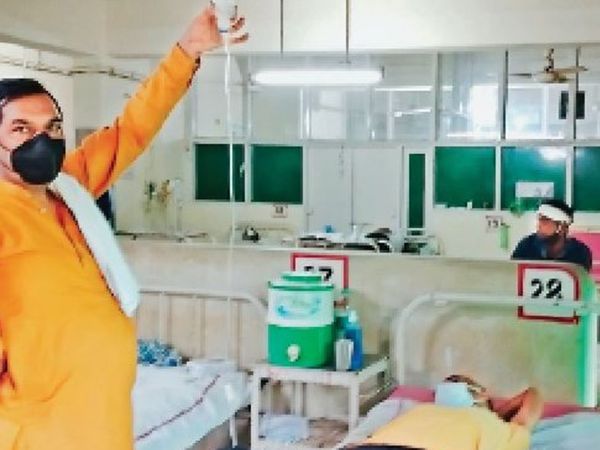 Rohtak | Such is the condition of the system in PGE. Here, the patient of Black Fungus admitted in ward number 8 has to stand by holding the bottle in the hands of the family members due to not having a stand to hang the glucase near the bed. The family stands with this until the bottle is exhausted. Fatte Sumit Kumar

Figures surfaced in the history of 413 patients in the state

15.49% of patients who have never had a corona, said the Health Minister – do research

Black fungus patients are increasing rapidly across the country. The reason for this is being told to give more steroids to corona patients and lack of proper oxygen supply. With this, Corona infected, whose immunity is weak and patients of sugar are also said to be in the grip of black fungus.

Meanwhile, when the medical history of Black Fungus patients in Haryana was reconstructed, shocking facts have emerged. In 413 patients, 110 patients (26.63 percent) were never given steroid despite having corona. However, 51.57 percent was not given oxygen.

Know this – it came out in the history of 413 patients

Apart from these, 4 patients have been found in Karnal, 2 in Fatehabad and one each in Ambala, Panipat and Rewari. So far, the maximum number of 140 patients has been found in Gurgaon, 107 in Hisar. On Tuesday, 446 amphotericin injections have been given by the Technical Committee for 223 patients.

In the data that has come out, most of the patients have neither been given oxygen nor have many been given steroids. Black fungus is the subject of research in such patients. –Anil Vij, Health Minister

Also Read: Yas: Due to the cyclone, people will not be able to witness the super blood moon and lunar eclipse, clouds and rain will become obstacles.