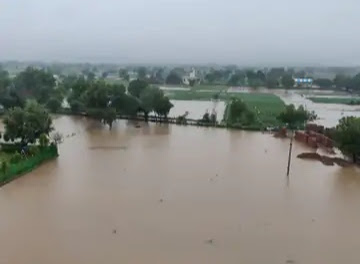 Waterlogging in Rewari fields due to water coming from the mountains of Rajasthan.

Badra is raining as a disaster in Rewari district of Haryana. The rain has not stopped for the last 24 hours. Due to which flood situation has arisen in 5 villages of Rewari adjoining Rajasthan. Due to the water coming from Rajasthan side, the fields of Khandoda, Mohanpur, Tankadi, Kankar, Kutina and Naya villages have been flooded. The Rewari administration has alerted the departments.

Irrigation department officials have reached Khandoda. Rewari has received 87.5 mm of rain in the last 24 hours. Manethi recorded the highest rainfall of 107 mm. It has been raining heavily in the district since 8 am on Sunday. Although the rain was light in the evening, but it rained heavily throughout the night. The situation has become such that not only the city of Rewari but even the villages have become waterlogged.

Rewari is adjacent to Alwar district of Rajasthan. Every year there is a danger of floods during the rainy season, because due to excessive rains, all the water of the hill from Rajasthan side comes towards the adjoining Rewari. Rajasthan has also been receiving torrential rains for the last two days. The water coming from the top of the hill is entering the villages of Rewari through Gilot Sirani and Partapur chak since Sunday night, due to which the fields were flooded with water.

Fields flooded with rain water in Karnal: One and a half hour drizzle reduced the temperature by 4 degrees, farmers of 20 villages were in trouble, fears of crop failure

The effect of the first rain: The rain water on the hills adjoining Chandigarh started overflowing in the rivers, last year also the rain water spread on the roads.

Rain condition in Rewari in 24 hours

Roads of Rewari flooded due to one hour of rain, Today 27 in the city, more than 50 mm of rain fell in two...