Rain water filled the fields in the villages of Karnal. 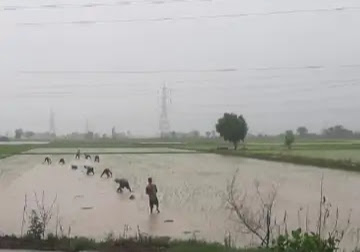 In Haryana’s Karnal district, Monday’s day started with light drizzle. People have got relief from the heat due to change in weather. On the other hand, the problems of the farmers of 20 villages have increased. According to Dr. Madan Khichad, Chairman of Meteorological Department, there will be rain in the coming 24 hours as well. Due to rain in the last few hours, the maximum temperature has come down from 32 to 28 degrees Celsius.
So far 348 mm of rain has been received in the month of July. Out of this, 312 mm of rain has happened in three days between July 13 and 15. But due to this, the fields of about 20 villages have been filled with water, which has increased the problems of the farmers. The farmers of these villages are worried about the failure of the paddy crop planted a week ago.
Water is inundated in the fields of 20 villages including Ramba, Darad, Salaru, Sambhali, Rodan Majra, Dachar, Hansu Majra, Hathalana. Farmers have demanded water withdrawal from DC.