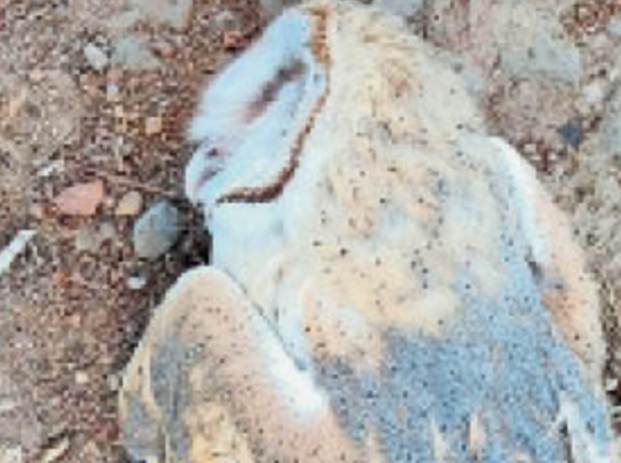 Two dead owls have been found near Majgaon Road and Godana Resort in Kawardha-city on Saturday. The dead owls were taken to Lalpur nursery, where they are buried with samples. In the last 3 days, 4 owls have died mysteriously.

Due to this, the risk of bird flu is increasing, but it will be confirmed only after the investigation report is received. Forest officers were searching for extinct owls in Bhoramdev Sanctuary. Their information was being gathered. Meanwhile, owls are mysteriously dying.

Now the officer is engaged in counting the bodies of owls. The dead owl was found on 14 January by the Shree Radhakrishna large temple pond. Then on January 15, the bird flu has been stirred by the discovery of two dead owls in Gandhi Maidan and now near Mazgaon Road and Godna Resort. There have been 7 bird deaths in the district in a week. First a dead catch was found in Koyalari Kampa in Pandaria block.

Two dead herons have been found in Chilfi and Kawardha and 4 dead owls have been found in Kawardha city. An alert has been issued in the district regarding bird flu. The team of Animal Husbandry and Medical Department is engaged in monitoring. The supply chain of chickens in poultry farms and the transport of birds from the border state of Madhya Pradesh is closely monitoring. Samples of chickens are being taken from poultry farms and elsewhere.

Dr. PN Shukla of the Veterinary Department says that 16 samples have been taken so far. It has been sent for investigation, but no report has been received. There is a lab in Bhopal (MP) to check for bird flu. Samples are being sent from all the districts. Sampling has become so much that there is a delay in getting the investigation report. Now, samples are being sent to Pune (Maharashtra) lab for bird flu examination.

Bird flu has not been confirmed in the district yet. Still the alert continues. Because many migratory birds come from different states and countries in the district. Their arrival increases the risk of bird flu. DFO Dilraj Prabhakar says migratory birds arrive in Vananchal every year during the early winter. They last until February. During their stay the female bird lays eggs in the forest.