Haryana a week ago brought trouble at many places. One of these is Sambhali village in Karnal district. Here the crops are submerged in the fields for the last one week, while school students and teachers are also facing a lot of trouble. They take their shoes in their hands as soon as they turn from the village road to the school and then wear them after reaching inside the class. The same happens during the holidays.

In this way, children have to move in and out after taking off their shoes. 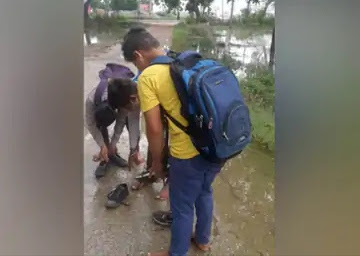 Let us inform that from July 13 to 15, there was heavy rain in entire Haryana. Since then, the campus of the Senior Secondary School in Sambhali has been flooded. The water is not getting less here for a week, due to which the education of the children is getting disrupted, while there is a fear of getting sick. The villagers have urged the administration to get rid of the problem by arranging for the drainage of rain water filled in the school.

Vansh of class VII said that the second way to the school falls from a distance of about 500 meters. Aman told that due to the water at the school gate, he has come to the school to drop his sisters on the bike. Without a bike, they had to either pass through the water or take a long detour and come through another gate. Villager Ishwar says that for the last several days the school pond has remained. Because of this, many children are not coming to school and those who come, there is a fear of getting sick.

On the other hand, when the District Education Officer Rajpal was talked about this, he said that the school would be visited. Appropriate arrangements will be made to rectify such condition so that children do not face any kind of trouble.

50 days of monsoon: After 20 days in Haryana, the quota of monsoon rains came in plus