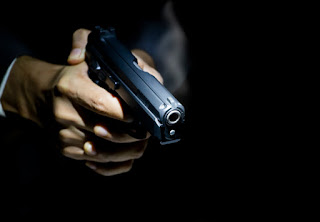 Two miscreants on the bike opened fire on the Jaglan Lab operator in the street of Meenakshi Hospital. The bullet went into the lab gate. Both bike riders had their mouths covered with clothes. Due to this, both have not been identified. The lab operator and his assistant narrowly escaped the incident. The shooting incident was captured on CCTV. As soon as the information was received, the team of Assandh Police, CIA Assandh reached the spot. Later DSP Gajendra Singh inspected the opportunity.

Jagalan Lab Director Rahul Vasi Village Upalani said that he has a lab with Meenakshi Hospital. He and his assistant Rahul Kumar were sitting inside the resident Upalani lab. Meanwhile, two masked crooks came from Ramnagar on a bike and the young man sitting on the moving bike shot towards the lab. Crowds of people gathered on hearing the sound of the bullet. As soon as the information was received, the team of police station of Asandh reached. Later, the team of CIA Assandh also arrived. The police have started the investigation by capturing the CCTV footage. DSP Gajendra Singh also inspected and made inquiries. After the CCTV incident, the bike riders were seen escaping towards the National Highway 709A.