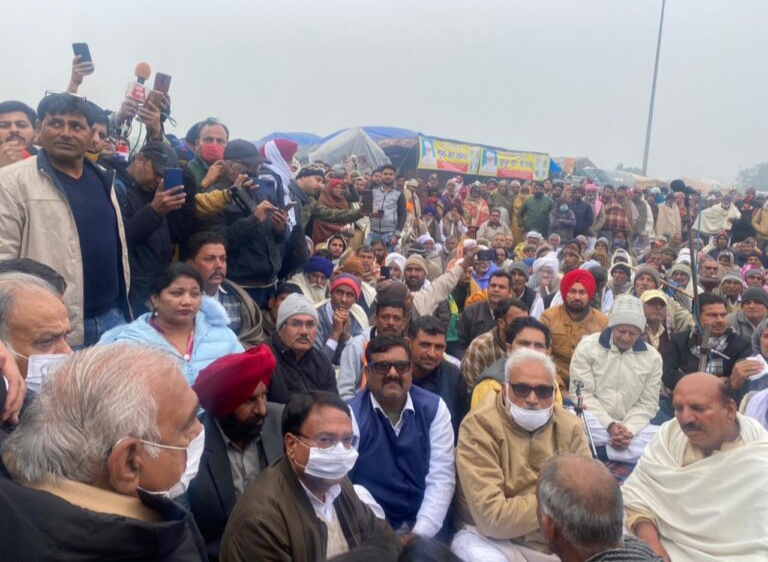 Chief Minister and Leader of Opposition Bhupendra Singh Hooda reached the Basatada toll in Karnal today, reaching among the farmers who were dharna at different toll plazas of the state including Delhi border. On this occasion, he spoke to the farmers and expressed concern over the attitude of the government.

He said that the Annadata is running the biggest movement of the country in the face of harsh conditions. But instead of obeying his words, the government is adopting an attitude of neglect, provocation and dictatorship. Instead of listening to the voice of the farmers, the government is engaged in creating and provoking conflict situations.

Therefore, the government should stop trapping farmers in false cases. And the Government of India should not act with malice or revengeful intentions towards the farmers. Public democracy and non-violent movements in democracy cannot be suppressed on the strength of confrontation, provocative action, water cannon splashes, tear gas shells and police sticks. The more the government tries to suppress the voice of the public, the louder its echo will be heard.

The Leader of Opposition said that the farmers are carrying out the movement in a fully disciplined and peaceful manner. Due to the government’s neglect and lethality, there are reports of daily martyrs from the Delhi border. Despite this, the government remains insensitive to the sacrifices of the Annadata. He urges that the government should give financial help to the farmers who sacrificed their lives in the movement and provide jobs to the family. If this government does not do this, then it will be done after the formation of our government.

Bhupendra Singh Hooda said that the demands of the farmers are completely valid. That is why every class, rising above caste, religion, region and politics, is supporting this movement today. They themselves have been supporting the movement since day one. He salutes the disciplined spirit of the Annadata. Running such a large movement in such a peaceful manner is itself a democratic example.