Farmers have been agitating against agricultural laws for 39 days. So far 54 farmers have died during this movement. Some of these have committed suicide and many have lost their lives due to diseases, cold and heart attack. On Sunday, 4 farmers died on the Singhu and Tikri borders. Two of them hailed from Haryana and two from Punjab. 👉The cause of death said to be heart attack👈. Another farmer is in critical condition, referred to PGI, Rohtak.

According to the information, 18-year-old Jashnpreet Singh of Bathinda, who is staging a strike at the Tekri border near Bahadurgarh, suddenly deteriorated late on Saturday night. He was rushed to the civil hospital and then PGI, where doctors declared him dead.

The body of Jagbir of Jind, Haryana was found in a trolley. They were also protesting at the Tikari border itself. He was 66 years old.

Balveer Singh of Sonipat and Nirbhay Singh, resident of Lydwan, Punjab, slept in the tent of Parker Mall on Saturday night on the Singhu border. When the comrades tried to awaken in the morning, there was no movement in their body. Doctors declared both dead when taken to the hospital.

Apart from this, another farmer has suffered a heart attack. He has been referred to PGI due to his condition being critical. 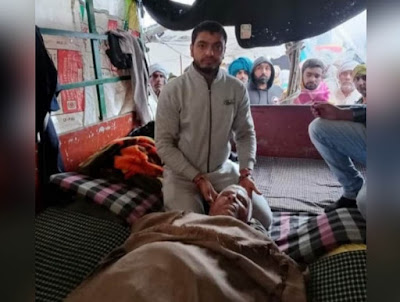 Demand for compensation arises after 54 deaths in 39 days

Thousands of farmers have been staging a strike on the Delhi border since 26 November. During this period, 54 farmers have lost their lives. Families and farmer organizations are demanding compensation and jobs to the families of these farmers.

Rainfall continues intermittently in Delhi and NCR areas since Saturday morning. On Sunday, the cold is increasing after rain for the second day. Due to rain, water entered the tents of many farmers, but the farmers are stuck on their front. He says that the performance will continue until the demands are met.

In the 7th round of talks, 2 demands were agreed

The 8th round of talks is to be held between the farmers’ organizations and the Center on 4 January. Farmers have 4 major issues.

1st the government should withdraw all three agricultural laws. 2nd the government should give a legal guarantee that it will continue the minimum support price. Third- Electricity bill will be withdrawn. 4th- the provision of punishment for burning stubble should be withdrawn. On December 30. The 7th round of talks. after five hours of negotiations, agreed on two issues related to the electricity bill and the straw. The government agrees to address the concerns of farmers. After this, the peasant leaders also showed softness. Differences on agricultural law and MSP still persist.